The Second short-term exchange of groups of pupils took place at the RSG Wolfsbos in Hoogeveen, The Netherlands in November 05-11, 2018. Twenty four students from the three partner countries were hosted by Dutch families for a week. From Italy participated ten students and two teachers, from Spain eight students and two teachers and from Greece six students and two teachers.For some students this was the first transnational exchange so they were excited associating with their European partners. Before the mobility they had met through social media and TwinSpace. They experienced the warm hospitality of the Dutch families, the family rules and the daily life. Some families hosted one student of each partner country and a friendly atmosphere developed very fast among them. They enjoyed eco transportation to school, as they were coming by bicycles. They were impressed by the well-equipped school. The organization of the Dutch colleagues was exemplary and the activities were very interesting. Students and teachers followed lessons in different classes. In mixed teams students discovered the city’s attractions through recreational activities and were guided to a windmill. There was a daily evaluation of the activities. They collaborated in mixed groups to find an innovative, environmentally friendly business idea. They practiced English Language and developed digital skills and skills of life. The program of each day ended with an interesting trip to the surroundings. We also visited the Nemo Museum in Amsterdam and met the canals of the city by cruising along the Amstel River. Particularly interesting and pleasant for the teachers was the dinner with a Dutch family and the dinner at Ymie’s house where partners prepared dishes of their country. The last evening we all enjoyed the farewell dinner, organized by the families, in the cozy classroom of the school. During our saying an article about our meeting was published on the local press. It was an unforgettable experience for our students because apart from improving their entrepreneurial and digital skills they developed strong friendship bonds with their partners.

Introducing the school of Hoogeveen to the students

Preparing for the Second short-term exchange of groups of pupils of in Hoogeveen, Netherlands 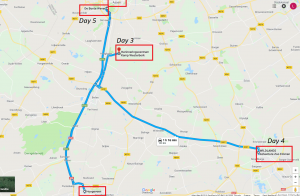 Places we are going to visit 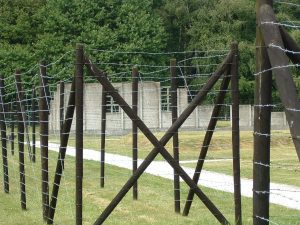 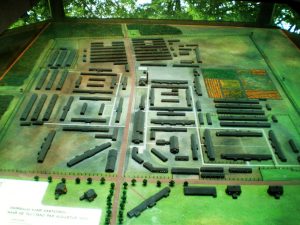 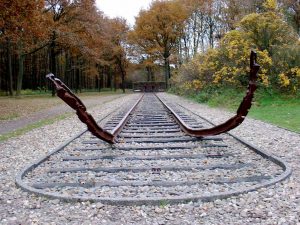 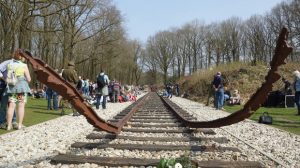 The 102.000 stones monument at Westerbork 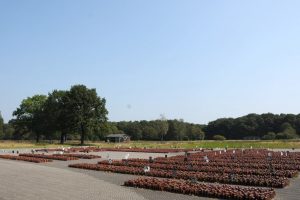 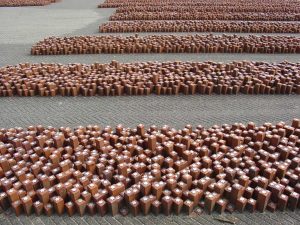 Each individual stone represents a single person that stayed at Westerbork and died in a Nazi concentration camp. 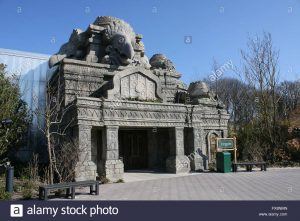 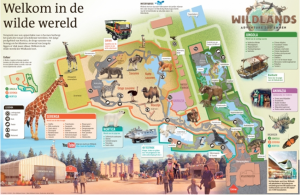 Wildlands, also known as Wildlands Adventure Zoo Emmen, is a zoo in Emmen, the Netherlands. It opened in March 2016, replacing the Emmen Zoo. Wildlands is an adventure theme park with four main areas: Jungola, Serenga, Nortica and Animazia. 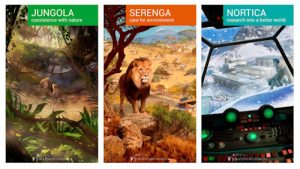 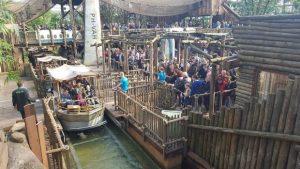 The most prominent feature of Jungola is the indoor tropical rainforest hall Rimbula, which at 18,000 m2 (190,000 sq ft) is the largest zoo jungle hall in the world and the largest greenhouse in Europe. 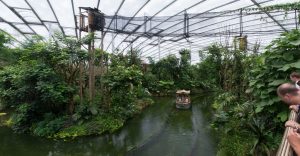 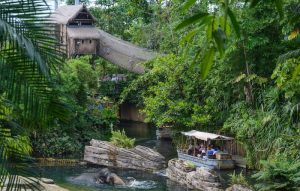 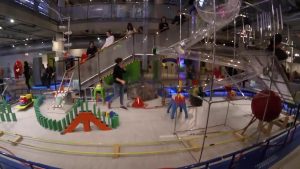 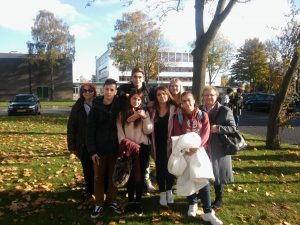 2nd day at school –The Greek students with their host partners

The Greek students in mixed groups

6th day – With the host families at the farewell party 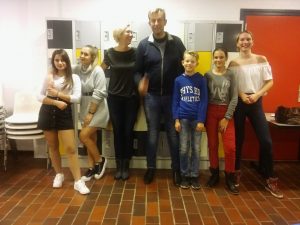 Greek students evaluate their 2nd Short-term exchange of groups of pupils in Hoogeveen 05-11.11.2018 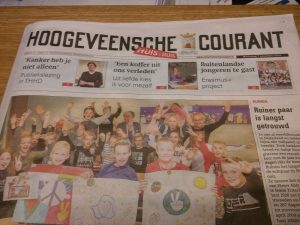 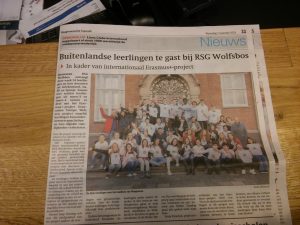 Third Short-term exchange of groups of pupils in Orte, Italy

The Third short-term exchange of groups of pupils took place at the Istituto Omnicomprensivo in Orte, Italy in April 08-14, 2019. Twenty four students from the three partner countries were hosted by Italian families for a week. On Monday morning, before meeting with the families in Orte, the Greek students were guided to Rome; to the Colosseum, the Imperial Markets, Piazza Venezia, Piazza Navona, Pantheon, Fontana di Trevi and Piazza Di Spagna.

All students were excited meeting their European partners. Six of them had the pleasure to meet again their partners that they had met in the Netherlands last November. They experienced the warm hospitality of the Italian families, the family rules and their daily life. Particularly interesting and pleasant for the teachers was the dinner with an Italian family. The Italian colleagues organised an excellent meeting and very interesting activities inside and outside the school. Students collaborated in mixed teams and created a digital tourist brochure for different ages for a tourist site in Latium, practicing English Language and developing digital skills. In the end, they evaluated their participation through a questionnaire and presented the results of their work to the Italian families. The program of each day ended with an interesting trip to the sights and natural landscapes of Latium and Umbria. Because of the rainy weather on Wednesday the Italian partners changed the afternoon program of Tuesday with Wednesday’s.

On Tuesday afternoon students had trekking activities with guides of 8km to admire the Etruscan Pyramid of the 7th or 6th BC. which was discovered in the 1990s by two local archaeologists and the Tower of Chia or Tower of Pazolini where the famous actor, poet, writer, screenwriter and director wrote his works and lived in the last years of his life. He discovered the place during the filming of “The Gospel according to Matthew”.

On Wednesday afternoon they were guided to the underground aqueduct of the old town of Orte and the narrow alleys overlooking the Tiber River and enjoyed a performance by locals in medieval costumes on the central square of the town.

On Thursday afternoon they visited the beautiful Florence in Tuscany with the buildings and monuments of imposing architecture that brought them to another era, grandeur, wealth and abundant art. The tour began at Santa Croce, built in 1294 in Gothic style, and hosts the tombs of many well-known Florentine children, such as Galileo, Machiavelli, Michael Angelus, Lorenzo Gilberti and Leonardo Bruni. Impressed by the dimensions of Santa Maria del Fiore with the huge dome of Brunejske, which dominates the historic center and is the famous cathedral of the city. They admired the famous Gates of Paradise of the Baptistery, made of gold, depicting scenes from the Old Testament by Lorenzo Guerrero. They saw Palaccio Vecchio and admired the great David of Michael Angelus, who depicts the biblical hero who killed Goliath. They walked to the bustling Ponte Vecchia, which is the oldest bridge of the city, dating back to 1345. The day was closed with a tour at the Uffizi Gallery, the first gallery in the world created by the architect Vazari in the late 16th century, where they admired the masterpieces of Botticelli, Spring and Aphrodite, as well as paintings by other Renaissance artists.

On Friday afternoon 7.7 kilometers away in Terni, the provincial capital of the Italian region of Umbria, they visited the natural landscape of Cascata delle Marmore, the tallest man-made waterfall in the world created by the ancient Romans. Its total height is 165 meters.

The tour ended on Saturday morning at the “terrifying” Parco dei Mostri in Bomarzo, commissioned in 1552 by Prince Francesco Orsini, as an expression of sadness and designed to shock. This park inspired Salvador Dali of “The Temptation of Saint Anthony”.

On Saturday evening we all enjoyed the farewell dinner, organized by the families, at the school. It was an unforgettable experience for our students because apart from improving their entrepreneurial and digital skills they developed strong friendship bonds with their partners.

Before the meeting in Orte, Italy

Meeting with the families in Orte 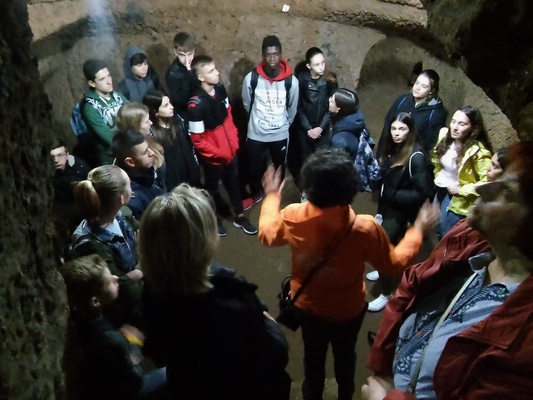 With the hosting students

Dinner with the hosting families

Presentation of the groups’ work to the parents

With the hosting families

Departure of the Greek delegation

EVALUATION by the Greek students

Group evaluation in Orte by the Greek students Responses 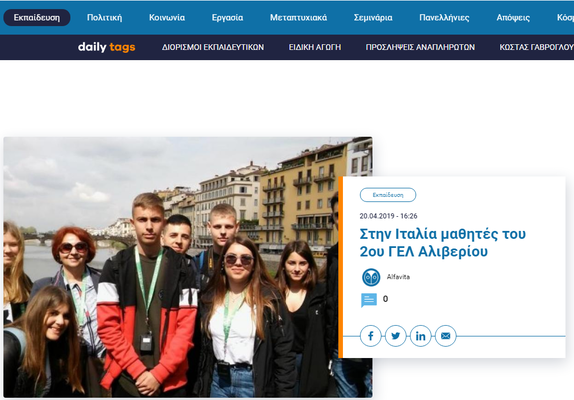 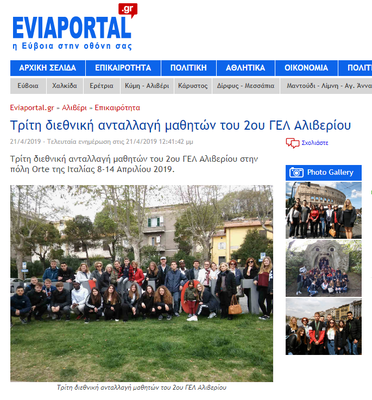 Conference about the Final Report and the Mobility Tool of Eramus+ KA219 projects organised by IKY in Athens July 3rd, 2019 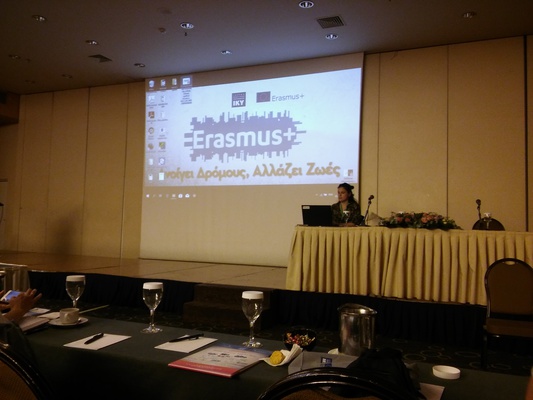 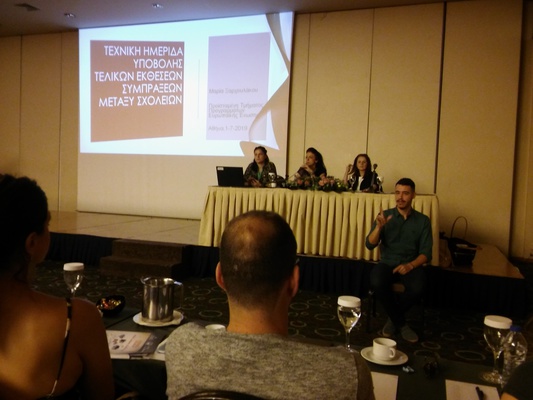 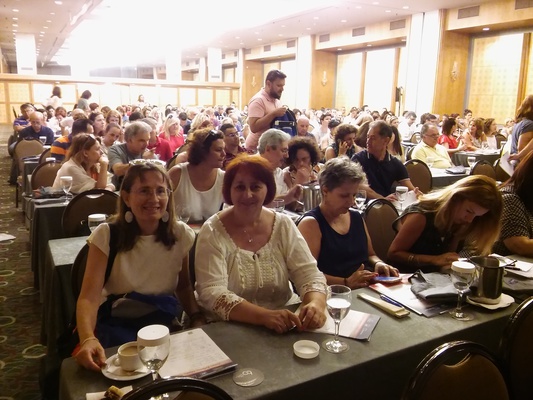 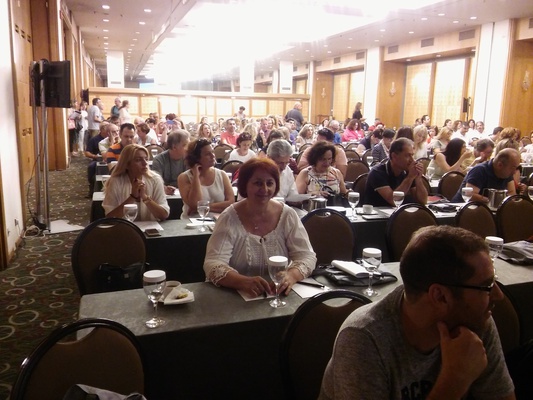